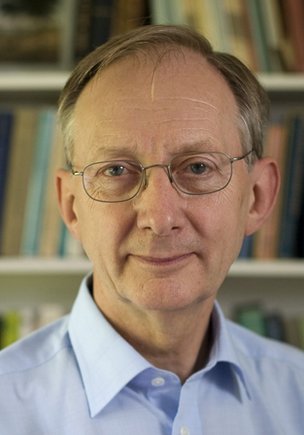 Congratulations to John Pendry, the British theoretical physicist who helped build the first working "invisibility cloak" has won the 2013 Isaac Newton Medal of the Institute of Physics.

In an article from PhysicsWorld.com Hamish Johnston writes "John Pendry of Imperial College, London, receives the international award for "his seminal contributions to surface science, disordered systems and photonics". The Newton medal – the Institute's most prestigious prize – has been awarded annually since 2008.

The medal is given for "outstanding contributions to physics" and includes a £1000 prize. This year's award will be presented at a ceremony in London on 15 November and Pendry will also give the Institute's Newton Lecture in October. Previous winners of the medal include Martin Rees, Leo Kadanoff, Edward Witten, Alan Guth and Anton Zeilinger.

In a career spanning nearly 50 years, Pendry has worked on the physics of surfaces, low-energy diffraction and X-ray spectroscopy. However, he is probably best known for his more recent work on "metamaterials" and also on "transformation optics" – a concept that he developed. This research has led to the experimental realization of invisibility cloaks, perfect lenses and other remarkable electromagnetic devices.

Metamaterials are engineered structures that respond to electromagnetic waves in unusual ways, such as having a refractive index that varies throughout and even – in some cases – taking on a negative value. In a landmark paper published in Physical Review Letters in 2000, Pendry described how a metamaterial could be created with a negative index of refraction for microwave radiation. Such a structure was built the following year by David Smith and colleagues at the University of California, San Diego. In 2006 Pendry teamed up with Smith (now at Duke University) and colleagues to use negative-index metamaterials to create the first invisibility cloak.

While the mathematics describing how electromagnetic radiation interacts with metamaterials can be complicated, Pendry realized that it could be described elegantly by borrowing ideas from Einstein's general theory of relativity, which is the basis of transformation optics.

'In his illustrious career, John has revolutionized the way physicists think of materials and, in particular, the way materials react to light," says Peter Knight, president of the Institute. 'His theories have inspired experimentalists around the world to design metamaterial devices including, of course, the highly anticipated invisibility cloak.'

For more on the physics of invisibility, download a free PDF of the July special issue of Physics World, which is devoted to that topic.

You can also watch John Pendry's colleague at Imperial College, Martin McCall, explain how invisibility cloaks work in the video 'Can we make objects invisible?'."