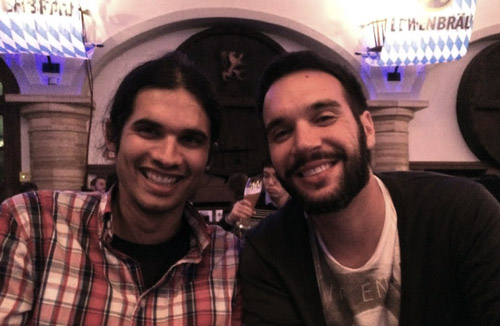 I had the chance of attending the CLEO/Europe-EQEC 2015 conference which was held in Munich, Germany from June 21st to June 25th. This conference is certainly the major European Scientific event of the International Year of Light. It is the largest and most comprehensive gathering of international scientists in optics and photonics research organized in Europe. As for CLEO in the US, the quality of this conference is exceptional and the scientific program is very rich with topics covering quantum and atom optics, nonlinear phenomena, plasmonics, metamaterials, biophotonics, optical metrology or computational photonics...

As for CLEO US, this conference had its fair share of Nobel recipients who gave plenary talks. Aside from Stefan Hell and Eric Betzig who gave talks that were very similar to those given in San José about a month earlier. Theodor Hensch, who was awarded the Nobel Prize in Physics in 2005 for his contributions to the development of laser-based precision spectroscopy, including the optical frequency comb technique, also gave a talk on the new horizons for combs of light. He focused on the wide variety of applications of frequency combs and future prospects, notably high-speed Fourier spectroscopy and highly multiplexed nonlinear spectroscopy and microscopy. Serge Haroche – Nobel Prize in Physics in 2012 for ground-breaking experimental methods that enable measuring and manipulation of individual quantum systems – gave a presentation on real and artificial atoms interacting with photons: from fundamental physics to quantum information. During his presentation, people were particularly amazed at the degree to which complex “Schrödinger cat states” could be achieved in very high-Q superconducting cavities. For instance, his group was able to achieve a quantum superposition of vacuum with a 111-photon state. Federico Cappaso also gave a talk on high performance quantum cascade lasers from the mid-IR to the far-IR and their impact on science and technology.

Several sessions caught my attention. I came to realize the importance that the shaping of orbital angular momentum beams is taking within the community. Several groups around the world are currently seeking means to use metamaterials and metasurfaces to give spin to optical waves. Nonlinear metamaterials is also a very active field at the moment with people trying to investigate the nonlinear response of metastructures both at the applications and the fundamental level.

In this context, I was particularly happy with the turnout for my presentation for which the room was full. I gave a presentation entitled “Ultrafast Self-Action in an Air/Gold Plasmonic Waveguide”, which is the result of a fruitful collaboration between the David Smith’s and Maiken Mikkelesen’s groups. In this work, we investigate theoretically and experimentally the nonlinear propagation of surface plasmons on an air/gold interface which reveals large and ultrafast (100 fs) self-induced absorption. The experiments we made enabled us to make a direct measurement of the third-order nonlinear susceptibility. At the end of my presentation, I got a question from Pr. Martti Kauranen from the Tampere University of Technology in Finland, who seemed interested in knowing how surface roughness of a gold film might impact the nonlinear response of the single interface plasmonic waveguide.

This conference was also a great opportunity for me to meet and discuss with old colleagues. Patrick Bowen, who was also at the conference, and I spent a lot of time with Cristian Ciraci. Cristian gave an oral presentation on some of the work on the enhancement of third-harmonic generation in metals due to nonlocality, which is work he initiated here at CMIP and that is still going on in collaboration with David Smith. Patrick Bowen gave a remarkable poster presentation on the analysis and modeling of metamaterial absorbers.

Over all, this session of CLEO Europe was great and fully lived-up to the promises of the International year of light!