Metamaterials: An Investor’s Story
How to invest in a technology when you’re not sure what it’s good for

Abstract: We have started three metamaterials-based companies in the past 5 years, with a fourth arriving soon. However, the process actually began over a decade ago and much of it had to be invented along the way, because metamaterials was a new technology (or design approach) looking for applications, and the usual rules for spinning out companies did not really apply. The presentation will describe some of the steps and missteps along the way and will provide some of the lessons learned (and taught), some of the key considerations for future commercialization, and some thoughts the technologists’ roles in helping to drive commercialization of metamaterials in the future. 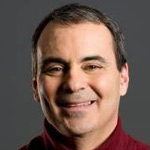 Over the past decade, Tegreene’s organization has founded several companies around ISF technologies in communications, imaging, medical, software, and radar technologies, and established a world-leading Metamaterials Commercialization Center at IV. Additionally, he has assisted several ISF inventors to become fixtures in the top-10 most-prolific inventor lists in the U.S., and partnered with several companies around the world to bolster their innovation.

Tegreene holds more than 600 patents relating to a wide variety of technologies. He is a co-founder of several ISF spinout companies, and serves as a member the board of directors of Kymeta Corporation, twice named to CNBC’s annual list of most disruptive technologies.

Prior to joining Intellectual Ventures, Tegreene served as intellectual property counsel and Chief Technology Officer for Microvision, Inc., a publicly traded Seattle-based photonics company. In addition, he was a co-founder of Lumera Corporation, a pioneer in electro-active polymer materials and devices for optical communications applications, also a publicly traded company. Earlier in his career, Tegreene practiced intellectual property at a law firm in the Northwest, Seed & Berry, where he specialized in IP matters, and at Cravath Swaine & Moore, a New York general practice law firm, where he specialized in corporate transactional work. He has also been a research engineer at Motorola.