Abstract: Antennas emerged at the dawn of radio for concentrating electromagnetic energy into a small volume << λ3, allowing for nonlinear radio detection. Such coherent detection is essential for radio receivers, and has been used since the time of Hertz. Conversely, an antenna can efficiently extract radiation from a sub-wavelength source, such as a small cellphone. Likewise, antennas can accelerate spontaneous emission from a small quantum dot or molecule, whose emission rate can become faster than stimulated emission. Antennas interact equally, with real electromagnetic fields, as well as the quantum zero point field fluctuations that are responsible for spontaneous emission. Regrettably, antenna physics is hardly addressed within the Physics curriculum. Whether from Jackson, the Feynman Lectures, or Yariv, it's hard to learn the true beauty of antenna science. This talk will commence with a pedagogic description of the three most important parts of antenna physics:

These properties are encapsulated in an antenna equivalent circuit that provides us with physical understanding. Since antennas are intended to work at frequencies well below the plasma frequency, plasmonic effects are usually a minor perturbation to antenna physics, only contributing some kinetic inductance to the underlying antenna properties. 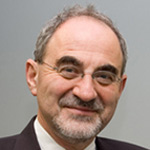 Biosketch: Eli Yablonovitch is Director of the NSF Center for Energy Efficient Electronics Science (E3S), a multi-University Center based at Berkeley. After a career in industry and in Universities, he is now Professor of Electrical Engineering and Computer Sciences at UC Berkeley, where he holds the James & Katherine Lau Chair in Engineering. He contributed the 4n2 light-trapping factor to solar cells, which is used commercially in most solar panels world-wide. He introduced the benefit of strained lasers, an idea which is employed in almost all internet telecommunications. He is regarded as a Father of the Photonic BandGap concept, and he coined the term "Photonic Crystal". Prof. Yablonovitch is a Fellow of the OSA, the IEEE, and the American Physical Society. He was elected a Member of the National Academy of Engineering, the National Academy of Sciences, the American Academy of Arts & Sciences, and as Foreign Member of the Royal Society of London. He has been awarded the Adolf Lomb Medal, the W. Streifer Scientific Achievement Award, the R.W. Wood Prize, the Julius Springer Prize, the IET Mountbatten Medal (UK), the IEEE Photonics Award, the Harvey Prize (Israel), and the Rank Prize (UK). He also has an honorary Ph.d. from the Royal Inst. of Tech., Stockholm Sweden, and from the Hong Kong Univ. of Sci. & Technology.