Abstract: Metal-dielectric nanocavities have the ability to tightly confine light in small mode volumes resulting in strongly increased local density of states. Placing fluorescing molecules or semiconductor materials in this region enables wide control of radiative processes including absorption and spontaneous emission rates, quantum efficiency, and emission directionality. In this talk, I will present an overview of our recent experiments utilizing a tunable plasmonic platform where emitters are sandwiched in a sub-10-nm gap between colloidally synthesized silver nanocubes and a metal film. By varying the size of the nanocubes, we tune the plasmon resonance by ~200 nm throughout the excitation, absorption, and emission spectra of embedded fluorophores and, for nanocavities resonant with the excitation wavelength, observe a 30,000-fold enhancement in fluorescence intensity [Rose et al. Nano Letters 14 , 4797 (2014)]. Utilizing emitters with an intrinsic long lifetime, and cavities resonant with the emission, reveals spontaneous emission rate enhancements exceeding a factor of 1,000 while maintaining directional emission and high quantum efficiency [Akselrod et al. Nature Photonics 8, 835 (2014)]. Incorporating semiconductor quantum dots into the nanocavities enables ultrafast spontaneous emission and the demonstration of an efficient single photon source. Additionally, by also utilizing the second order mode of the cavity, optical processes at multiple energies can be optimized simultaneously. We demonstrate this by enhancing both the absorption and the quantum yield in monolayer MoS2 resulting in a 2,000-fold enhancement in the overall fluorescence. Finally, the large field enhancement in these types of nanocavities is well-suited for control of nonlinear processes, and we show an increase in the third-harmonic generation in Al2O3 by nearly five orders of magnitude [Lassiter et al., ACS Photonics 1, 1212 (2014)]. These artificially structured hybrid nanomaterials hold the promise to enable a new class of ultrafast optoelectronic devices such as LEDs, enhance the performance of photovoltaics and bio sensors, and impact quantum-based technologies. 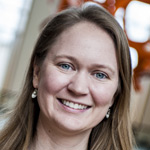 Brief Biosketch: Maiken H. Mikkelsen is an Assistant Professor in the Department of Electrical and Computer Engineering and in the Department of Physics at Duke University. Her research interests span ultrafast optical experiments in nanophotonics, plasmonics, light-matter interactions in quantum confined structures, spin phenomena in the solid state, and quantum information science. She received her B.S. in Physics from the University of Copenhagen, Denmark in 2004, and her Ph.D. in Physics from the University of California, Santa Barbara in 2009 in the group of Prof. David Awschalom. Before joining Duke in 2012, she was a postdoctoral fellow with Prof. Xiang Zhang at the University of California, Berkeley. Her awards include the Ralph E. Powe Junior Faculty Award (2014), the Air Force Office of Scientific Research Young Investigator Award (2015), and the NSF CAREER award (2015).