Abstract: Materials manipulate waves, and therefore they can tailor, control, redirect, and scatter electromagnetic waves and photons at will.  Recent development in metamaterials and nanomaterials has made it possible to sculpt fields and waves at the nanoscale, and thus has provided suitable platforms for innovation in information processing and computation at subwavelength domains.  We have been exploring how metamaterials can facilitate data processing, image sensing, information handling, and mathematical operations and computation with light. Starting from optical metatronic nanocircuits, we can design structures in which waves may undergo proper evolution, resulting in mathematical computation. In this talk, I will discuss some of the challenges and opportunities in such informatics metamaterials, and will present some of the results of our team’s work. 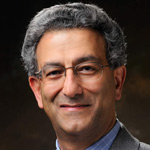 Biosketch: Nader Engheta is the H. Nedwill Ramsey Professor at the University of Pennsylvania in Philadelphia, with affiliations in the Departments of Electrical and Systems Engineering, Physics and Astronomy, Bioengineering, and Materials Science and Engineering.  He received his B.S. degree from the University of Tehran, and his M.S and Ph.D. degrees from Caltech.   He is the recipient of several awards for his research including 2015 SPIE Gold Medal, 2014 Balthasar van der Pol Gold Medal from the International Union of Radio Science (URSI), 2013 Benjamin Franklin Key Award, 2013 Inaugural SINA Award in Engineering, 2012 IEEE Electromagnetics Award, 2008 George H. Heilmeier Award for Excellence in Research, the Fulbright Naples Chair Award, NSF Presidential Young Investigator award, the UPS Foundation Distinguished Educator term Chair, IEEE Third Millennium Medal, Guggenheim Fellowship, and Scientific American Magazine 50 Leaders in Science and Technology in 2006.  He is Fellow of SPIE, IEEE, APS, OSA, MRS, and American Association for the Advancement of Science (AAAS). He has also received several teaching awards including the Christian F. and Mary R. Lindback Foundation Award, S. Reid Warren, Jr. Award and W. M. Keck Foundation Award.  His current research activities span a broad range of areas including nanophotonics, metamaterials, nano-scale optics, graphene optics, imaging and sensing inspired by eyes of animal species, optical nanoengineering, microwave and optical antennas, and engineering and physics of fields and waves.  He has co-edited (with R. W. Ziolkowski) the book entitled “Metamaterials:  Physics and Engineering Explorations” by Wiley-IEEE Press, 2006. He was the Chair of the Gordon Research Conference on Plasmonics in June 2012.