Recent progress on metamaterials in optics, thermodynamics, mechanics, and magneto-transport

Abstract: To me, “negative” effective material parameters and invisibility cloaking are among the most exciting aspects that become possible by tailored artificial materials called metamaterials. I shall discuss four recent corresponding examples from my group. First, I speak about invisible metal contacts on solar cells to increase their overall efficiency. Second, I address three-dimensional macroscopic core-shell invisibility cloaks in the diffusive regime of light propagation that work for all directions, colors, and polarizations of visible light. Third, I describe static elasto-mechanical cloaks designed by a direct lattice-transformation approach (instead of by material-parameter transformations). Fourth, I discuss three-dimensional metamaterials exhibiting a sign inversion of the classical Hall effect. A simple cubic lattice of interlinked tori made of an electron conductor, such as n-doped silicon, effectively appears like a hole conductor. 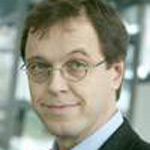 Brief Biography: After completing his PhD in physics in 1987 at Johann Wolfgang Goethe-Universität (), he spent two years as a postdoc at AT&T Bell Laboratories in Holmdel (U.S.A.). From 1990-1995 he was professor (C3) at Universität Dortmund (Germany), since 1995 he is professor (C4, later W3) at Institute of Applied Physics of  Karlsruhe Institute of Technology (KIT). Since 2001 he has a joint appointment as department head at Institute of Nanotechnology of KIT. From 2001-2014 he was the coordinator of the DFG-Center for Functional Nanostructures (CFN) at KIT. His research interests comprise ultrafast optics, (extreme) nonlinear optics, near-field optics, optical laser lithography, photonic crystals, optical, mechanical, and thermodynamic metamaterials, as well as transformation physics. This research has led to various awards and honors, among which are the Alfried Krupp von Bohlen und Halbach Research Award 1993, the Baden-Württemberg Teaching Award 1998, the DFG Gottfried Wilhelm Leibniz Award 2000, the European Union René Descartes Prize 2005, the Baden-Württemberg Research Award 2005, the Carl Zeiss Research Award 2006, and the SPIE Prism Award 2014 for the start-up company Nanoscribe GmbH.