Using inexpensive materials configured and tuned to capture microwave signals, researchers at Duke University’s Pratt School of Engineering have designed a power-harvesting device with efficiency similar to that of modern solar panels.

The device wirelessly converts the microwave signal to direct current voltage capable of recharging a cell phone battery or other small electronic device, according to a report appearing in the journal Applied Physics Letters in December 2013. (It is now available online.)

It operates on a similar principle to solar panels, which convert light energy into electrical current. But this versatile energy harvester could be tuned to harvest the signal from other energy sources, including satellite signals, sound signals or Wi-Fi signals, the researchers say.

The key to the power harvester lies in its application of metamaterials, engineered structures that can capture various forms of wave energy and tune them for useful applications.

They used a series of five fiberglass and copper energy conductors wired together on a circuit board to convert microwaves into 7.3V of electrical energy. By comparison, Universal Serial Bus (USB) chargers for small electronic devices provide about 5V of power.

“We were aiming for the highest energy efficiency we could achieve,” said Hawkes. “We had been getting energy efficiency around 6 to 10 percent, but with this design we were able to dramatically improve energy conversion to 37 percent, which is comparable to what is achieved in solar cells.”

“It’s possible to use this design for a lot of different frequencies and types of energy, including vibration and sound energy harvesting,” Katko said. “Until now, a lot of work with metamaterials has been theoretical. We are showing that with a little work, these materials can be useful for consumer applications.”

For instance, a metamaterial coating could be applied to the ceiling of a room to redirect and recover a Wi-Fi signal that would otherwise be lost, Katko said. Another application could be to improve the energy efficiency of appliances by wirelessly recovering power that is now lost during use.

“The properties of metamaterials allow for design flexibility not possible with ordinary devices like antennas,” said Katko. “When traditional antennas are close to each other in space they talk to each other and interfere with each other’s operation. The design process used to create our metamaterial array takes these effects into account, allowing the cells to work together.” 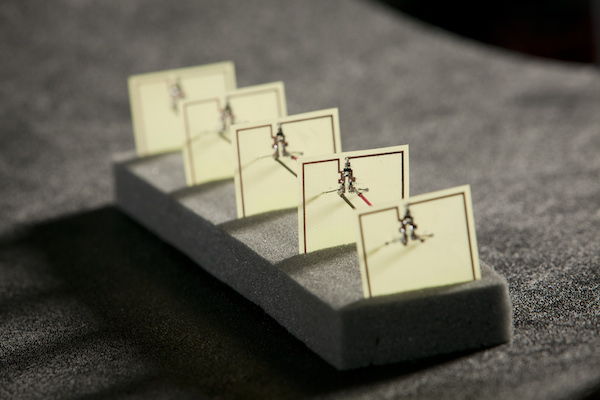 This five-cell metamaterial array developed by Duke engineers converts stray microwave energy, as from a WiFi hub, into more than 7 volts of power with an efficiency of 36.8 percent—comparable to a solar cell.

With additional modifications, the researchers said the power-harvesting metamaterial could potentially be built into a cell phone, allowing the phone to recharge wirelessly while not in use. This feature could, in principle, allow people living in locations without ready access to a conventional power outlet to harvest energy from a nearby cell phone tower instead.

“Our work demonstrates a simple and inexpensive approach to electromagnetic power harvesting,” said Cummer.  “The beauty of the design is that the basic building blocks are self-contained and additive. One can simply assemble more blocks to increase the scavenged power.”

For example, a series of power-harvesting blocks could be assembled to capture the signal from a known set of satellites passing overhead, the researchers explained. The small amount of energy generated from these signals might power a sensor network in a remote location such as a mountaintop or desert, allowing data collection for a long-term study that takes infrequent measurements.

The research was supported by a Multidisciplinary University Research Initiative from the Army Research Office (Contract No. W911NF-09-1-0539). Originally published November 7th, 2013 By Karyn Hede.