Maiken Mikkelsen, assistant professor of electrical and computer engineering and physics at Duke University, has earned an award through the Air Force Office of Scientific Research Young Investigator Research Program. The program supports scientists and engineers who have received their PhD in the last five years and show exceptional ability and promise for conducting basic research through three-year grants of $120,000. 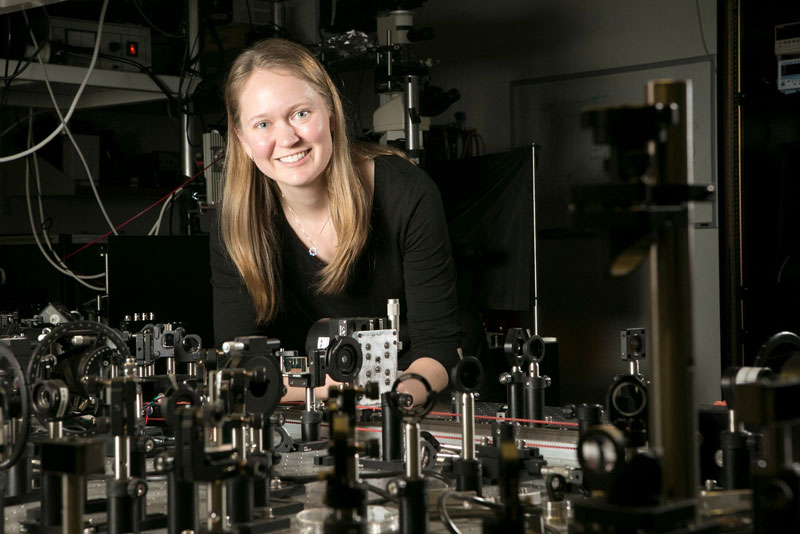 Mikkelsen will use the award to continue her research into making fluorescent molecules emit light much faster than their natural rates. In a recent study, Mikkelsen increased the photon emission rate of fluorescent molecules to record levels by precisely sandwiching them between metal nanocubes and a gold film. Her research, however, hinted that even faster results could be obtained by placing molecules with a certain orientation in specific locations under a silver nanocube.

In the proposed experiment, the fluorescent molecule’s orientation will be controlled through chemical techniques such as functionalization and DNA-assisted self-assemblies. If successful, the molecule’s fluorescence rate will likely be too fast for their current equipment to see. So, with the help of the grant, the researchers will also build a new detection scheme with a resolution only limited by the length of the ultrafast laser pulses used. This would enable the detection of molecules emitting light in less than one millionth of one millionth of a second. Mikkelsen also plans to begin exploring ways to integrate this basic research into practical applications, such as super-bright and ultrafast LEDs for light-based technologies to rival modern telecommunications systems.

“We could also make fast sources of single photons that could be used for quantum cryptography,” said Mikkelsen. “This technology would allow secure communications across vast distances that could not be hacked—at least not without breaking the laws of physics.”